Software systems are prone to the build up of cruft – deficiencies in
internal quality that make it harder than it would ideally be to modify and
extend the system further. Technical Debt is a metaphor, coined by Ward
Cunningham, that frames how to think about dealing with this cruft, thinking
of it like a financial debt. The extra effort that it takes to add new
features is the interest paid on the debt. 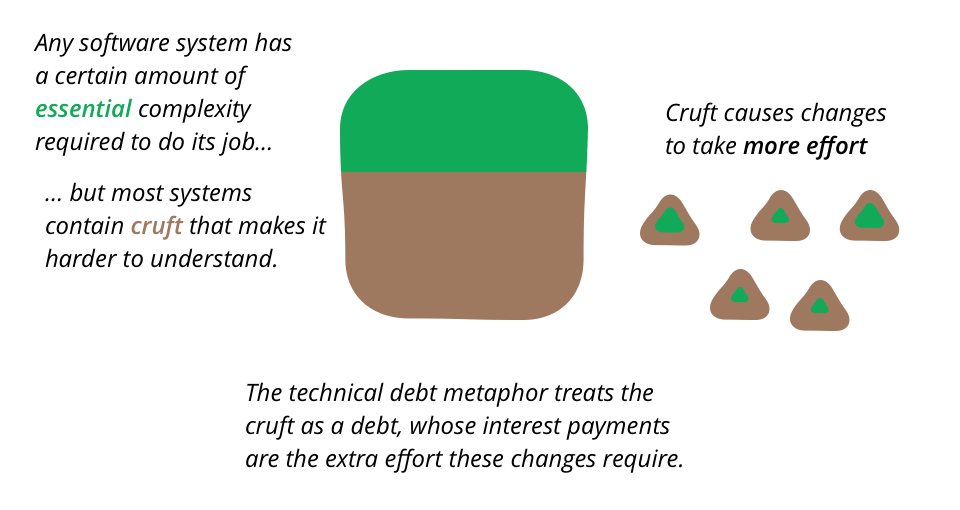 Imagine I have a confusing module structure in my code base. I need to add
a new feature. If the module structure was clear, then it would take
me four days to add the feature but with this cruft, it takes me six
days. The two day difference is the interest on the debt.

What most appeals to me about the debt metaphor is how it frames how I think
about how to deal with this cruft. I could take five days to clean up the modular
structure, removing that cruft, metaphorically paying off the principal. If I
only do it for this one feature, that’s no gain, as I’d take nine days
instead of six. But if I have two more similar features coming up, then I’ll
end up faster by removing the cruft first.

Stated like that, this sounds like a simple matter of working the numbers,
and any manager with a spreadsheet should figure out the choices. Sadly since
we CannotMeasureProductivity, none of these costs are objectively
measurable. We can estimate how long it takes to do a feature,
estimate what it might be like if the cruft was removed, and
estimate the cost of removing the cruft. But our accuracy of such
estimates is pretty low.

Given this, usually the best route is to do what we usually do with
financial debts, pay the principal off gradually. On the first feature
I’ll spend an extra couple of days to remove some of the cruft. That may
be enough to reduce the interest rate on future enhancements to a single
day. That’s still going to take extra time, but by removing the cruft I’m
making it cheaper for future changes to this code. The great benefit of
gradual improvement like this is that it naturally means we spend more
time on removing cruft in those areas that we modify frequently, which are
exactly those areas of the code base where we most need the cruft to be
removed.

Thinking of this as paying interest versus paying of principal can help
decide which cruft to tackle. If I have a terrible area of the code base,
one that’s a nightmare to change, it’s not a problem if I don’t have to
modify it. I only trigger an interest payment when I have to work
with that part of the software (this is a place where the metaphor breaks down, since
financial interest payments are triggered by the passage of time). So crufty but stable areas of code can
be left alone. In contrast, areas of high activity need a
zero-tolerance attitude to cruft, because the interest payments are
cripplingly high. This is especially important since cruft
accumulates where developers make changes without paying attention to
internal quality – the more changes, the greater risk of cruft building
up.

The metaphor of debt is sometimes used to justify neglecting internal quality.
The argument is that it takes time and effort to stop cruft from building up.
If there new features that are needed urgently, then perhaps it’s best to take
on the debt, accepting that this debt will have to be managed in the future.

The danger here is that most of the time this analysis isn’t done well.
Cruft has a quick impact, slowing down the very new features that are needed
quickly. Teams who do this
end up maxing out all their credit cards, but still delivering later than they
would have done had they put the effort into higher internal quality. Here the metaphor
often leads people astray, as the dynamics don’t really match those for financial
loans. Taking on debt to speed delivery only works if you stay below the
design payoff line of the DesignStaminaHypothesis, and teams hit
that line in weeks rather than months.

There are regular debates whether different kinds of cruft should be
considered as debt or not. I found it useful to think about whether the debt
is acquired deliberately and whether it is prudent or reckless – leading me to
the TechnicalDebtQuadrant.

As far as I can tell, Ward first introduced this concept in an experience
report for OOPSLA 1992. It has
also been discussed on the wiki.

Ward Cunningham has a video talk where he
discusses this metaphor he created.

A couple of readers sent in some similarly good names. David
Panariti refers to ugly programming as deficit programming.
Apparently he originally started using a few years ago when it fitted
in with government policy; I suppose it’s natural again now.

Scott Wood suggested “Technical Inflation could be
viewed as the ground lost when the current level of technology
surpasses that of the foundation of your product to the extent that it
begins losing compatibility with the industry. Examples of this
would be falling behind in versions of a language to the point where
your code is no longer compatible with main stream compilers.”

Steve McConnell brings out several good points in the metaphor,
particularly how keeping your unintended debt down gives you more
room to intentionally take on debt when it’s useful to do so. I
also like his notion of minimum payments (which are very high to
fix issues with embedded systems as opposed to web sites).

Henrik Kniberg argues that it’s older technical debt that
causes the greatest problem and that it’s wise to a qualitative
debt ceiling to help manage it.

I originally published this post on October 1 2003. I gave it a thorough
rewrite in April 2019.

Why are Distributed Systems So Hard?

You may have missed

Why are Distributed Systems So Hard?